Reflective Surfaces on Buildings are an Environmental Nightmare!

A new building on London’s skyline nicknamed the Walkie Talkie has been blamed for melted car parts due to the intense sunlight reflected from its glass exterior.  In a broadcast for Sky-News (movie) one reporter proves that it is possible to fry an egg in the reflected sunlight.  Developers say they are working to rectify the problem by coating the windows with a less reflective material.  The skyscraper’s magnifying glass effect will continue for the next few weeks until the sun’s elevation in the sky changes. 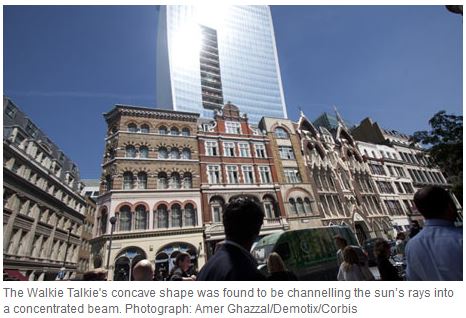 While white roofs are not  typically curved and are less reflective than the glass clad skyscraper, the physics behind these surfaces are exactly the same. They both are designed to reflect a high amount of the sun light back to the atmosphere.  And by doing so, the reflected sun light has a second chance of being captured by particles in the air, increasing atmospheric temperatures surrounding the buildings.  Certainly London’s Walkie Talkie skyscraper is an extreme example due to the unique shape of the building.  However, it shows very clearly the physics of reflective surfaces, the damage they cause to the surrounding environment and a lot about the lack of common sense of architects, researchers and self-promoted experts.

With this last example, the discussion of high albedo building coverings (above Albedo 0,55) as being environmentally friendly should be at an end.  Governments (e.g. EPA, LEED) should ban reflective surfaces on buildings immediately if they are serious with their environmental programs.  Whether they were blinded by incomplete research, spoiled by the Dollars of manufacturers or simply think they can trick physics,  it does not matter at this point.

Green Roof and Greens Walls (with low albedo) are the better and most advanced choice – naturally.