Net-Zero Townhomes Benefit From Vegetated PV Roofs
This suburban Washington, D.C., project proves there’s no need to choose between a green roof or a photovoltaic roof: By Ted Cushman

Developer-builders Jessica Pitts and John Miller of Flywheel Development had a goal and a problem with their Perry Street Townhouses project. Their goal was to build affordable net-zero townhomes in suburban Washington, D.C. Their problem was stormwater management: Rules in Prince George’s County, Maryland, required them to detain the runoff from heavy rainstorms on-site, rather than divert it into municipal storm drains. The poorly draining site soils and the tight site precluded traditional ground-based stormwater best management practices, so they looked to a vegetated rain-detaining roof for a solution. But Pitts and Miller also had other plans for the roof: They needed solar power to meet their ambitious energy goals.

In the end, Pitts and Miller reached both of their objectives with an innovative combination: a vegetated roof whose growing medium captures significant amounts of rainfall, with solar arrays mixed in with the plants and supported by modular frameworks that are anchored and ballasted by the green-roof growing medium. Manufactured by German firm Optigrün and Klima Roof, the PV array support system is imported from Germany, and the pair say this was the first time it had been deployed commercially in the United States. But Miller says the idea is a “no-brainer” financially: “Because the solar racking is ballasted by the green roof media and the plants that keep it from blowing away, that percentage of the green roof that is ballasting the panels is also eligible for the federal tax credit for PV.” The roof is also effective as a stormwater management system.

“The solar green roof is designed to detain between 1.8 and 2.4 inches of rainfall,” Pitts says. “There is little to no runoff from a small storm of about 1.2 inches or less, and runoff increases as the rainfall increases.”

The process started during the design phase. Says Pitts, “This can go on any sort of deck. Our structures are wood framed. But you have to account for the load that you’re going to be carrying with the engineering, so it’s important if you do this, to have a mind to do it at the beginning.”

The green roof media would help to protect the building’s EPDM roof from sunlight and weather. But the green roof and solar would also impede any needed repairs or maintenance down the road. So Pitts and Miller decided to install a leak detection system before laying down the roofing.

“We thought it was prudent to install a leak detection layer—it’s a metal mesh that goes underneath the roof membrane,” says Pitts. “What that allows you to do is that if you ever get a leak, you can identify the exact location of it.”

The thin stainless steel mesh comes in rolls and is installed directly to the roof deck before protection board and roofing are installed. “It looks like chicken wire,” says Pitts. “There are two leads that you can run up the side of your parapet wall and hang out at the top. And you can test even before you put the green roof on. We had the people come out and test the membrane as soon as it was in place. They wet down the roof and apply an electrical charge and they look for places where you get a connection.”

Miller explains that the leak testing crew uses a detector that looks like a push broom with metal bristles. “They found five or six little pinprick holes that you never would have noticed, and we patched them,” he says. “All you have to have is a roofer maybe bends over and maybe one of the metal brads on their jeans pokes a hole in the roof, or they drop their utility knife, and you would never know. The leak detection crew will circle this spot with a Sharpie, and you’re like, ‘Wait a minute, that’s a hole?’ But this way you know on day one that your roof is leak-free. And if you have a future problem, then you can find it.”

Next comes the layers of the green roof, which are integrated into the high-density plastic bases for the solar array racks. “You have your plastic protection layer, which keeps the roots from growing down into the actual roof itself,” Pitts says. “Then you have a protection mat, which is kind of like a felt material. That’s for protecting the roof membrane from the roughness of the growing medium. Then you have a geotextile mesh, and the mesh that we were using has large holes in it—it’s a loose weave—and that goes on top of the bases that the green roof ballasts down.”

The mesh wraps under and around metal edging at the roof perimeter, and it runs over the PV rack bases. An L-shaped metal bar is installed into each of those bases, and then the rack is accepted into those metal L bars, according to Pitts. Each grouping of panels is also tied together. “We had four individual systems on top of each of the four individual homes,” Pitts says. “So each panel grouping becomes linked together, and then they all become linked together through the geotextile mesh.”

Next it was time to place the growing medium. “It’s very common to have drainage trays and things of that nature to help reduce the depth of green roofs, but we wanted it to be thicker because we are using the weight of it to hold down the solar,” Pitts explains. “We had a green roof media company (Mulch Solutions of Falls Church, Va.) come and blow the media up onto the roof with its blower truck.” 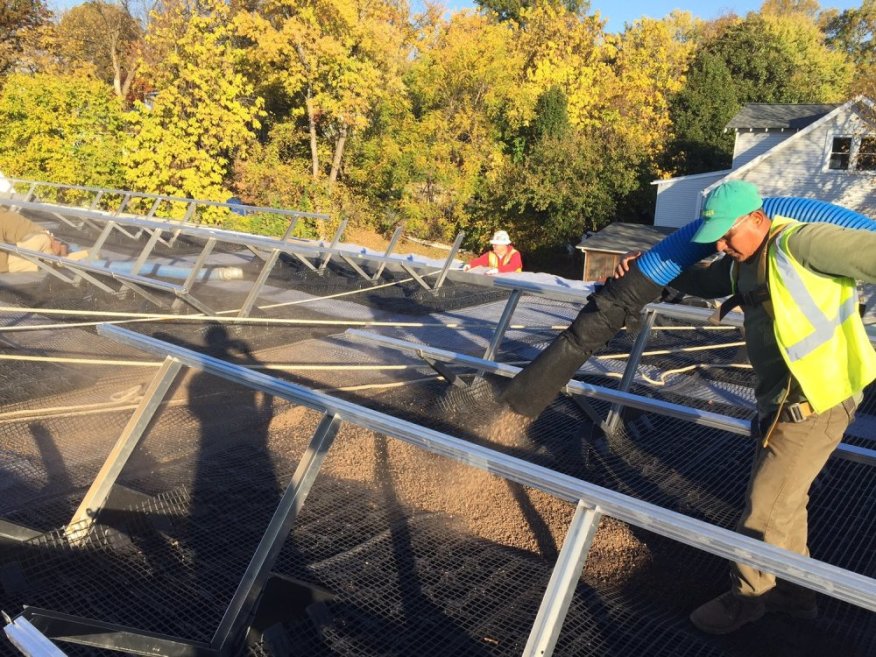 There were two types of media: a larger, heavier drainage medium as a base layer, then a layer of growing medium on top of that, separated by a layer of fabric. The entire placement with the blower truck took less than a day. Besides the efficiency, says Pitts, another advantage to the blower truck is that it avoids creating point loads on the roof during the application of the growing medium.

“And then the plants arrived,” says Pitts. “There are two different types of green roof plants. There are ones that grow in sun, and there are ones that grow in shade. So we had to demarcate the locations behind and beneath the panels, and allocate the shade plants to those locations; and the sun plants went everywhere else. And then we got all the PV equipment, and the PV panels came up last.”

The Perry Street Townhouses were completed in spring 2017, and the plants on the roof are spreading nicely over the growing surface. “Green roofs really require a lot of care and feeding in their first couple of years to get them to establishment,” Miller says.

Ted Cushman is a Senior Editor at JLC.